Korea On My Mind

I’m almost halfway through my Korean visa, and I should make better use of that 5 years that they’ve given me. So here I am planning a mini Korean holiday that is getting me more excited by the minute. 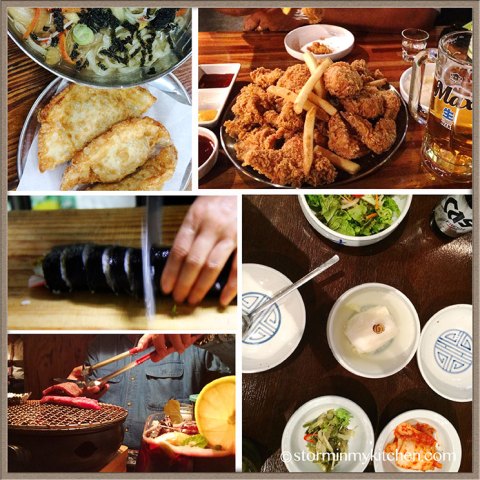 I imagine chicken and beer or chimek, mageoli, kimbap, fresh kimchi, samgyeopsal, deep-fried mandu, haemul pajeon, bingsu… My mouth water at the thought of grilled Hanwoo beef that melts in the mouth and I remember our incredible meal in Hongdae. And then my mind wanders to the other food I have to yet to have. I promised to go back for— jjajangmyeon, samyetang, soy sauce crab, sundae (not the frozen dessert but Korea’s blood sausage that got my attention because of these twins) and much more that I’m still not aware of.

So now I crave Japchae. That’s a Korean-style noodle dish that is usually served as a side dish consisting of vermicelli noodles, meat, and assorted vegetables sautéed in soy sauce. This version is without meat, and even my meat-loving hubby gave his thumbs up.

What to Eat in Kunming: Across the Bridge Noodle Soup 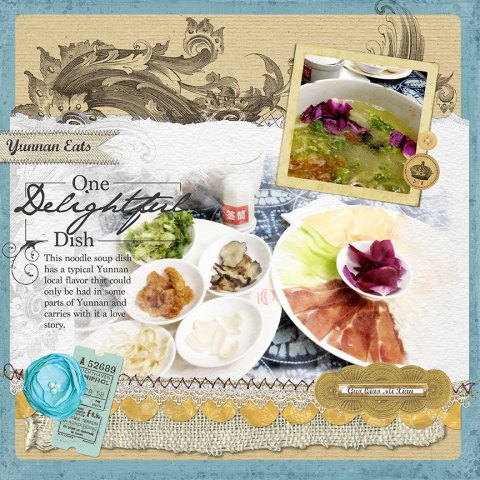 This noodle soup dish has a typical Yunnan local flavor that could only be had in some parts of Yunnan and carries with it a love story. A scholar, preparing for the imperial exams retreated to an island in a lake. The wife delivers lunch to him daily, crossing a long wooden bridge. Dismayed that she couldn’t keep it warm, figured out that adding a thin layer of fat on top prevents the heat from escaping. And by doing this, she discovered that she could bring the broth across the bridge and cook the rest of her Noodle Soup there.

And with that, I had our driver bring us to Qiao Xiang Yuan, a restaurant chain famous for its Guo Qiao Mi Xian, which translates to Across the Bridge or Crossing Bridge Rice Noodle.

Driver Wang ordered for us. Minutes later an attractive mix of ingredients laid before us. There were slices of lightly cooked (some raw) meats, Yunnan ham, strips of bean curd sheets, mushrooms, vegetables, rice noodles (of course) and a piping hot broth with a layer of chicken fat and oil glistening on top, the key to this noodle soup. The meat sliced wafer thin so that it will cook almost immediately when added to the broth. Once the vegetables and noodles are added, stir it a bit, and the Guo Qiao Mi Xian is ready to eat. 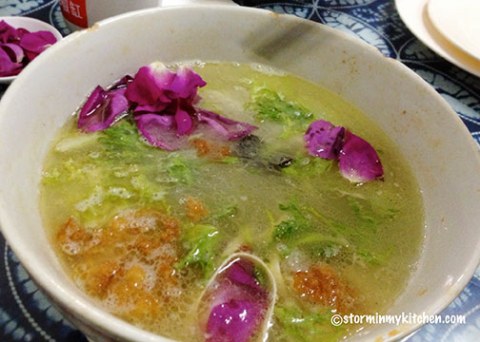 A must try when in Kunming.

To read more about Kunming and Yunnan, read this and this.

Where to Eat in Macau: Wong Chi Kei Congee & Noodle

Famous for their hand-made noodles, we searched for it and found it at the left side, sitting opposite McDonald’s as you enter Senado Square.

Many, my dad included, claim that they make the best Cantonese noodles in Macau.

Dark wooden interior make up what seemed like a tiny noodle shop until you walk in and realize that it has a mezzanine and a 2nd floor.

The menu was extensive but most of us went for the Wanton Noodle Soup while my brother decided to go for the one with Roasted Duck.

The bowls arrives from a dumb-waiter with noodles and in our case, wanton sans the soup.  The waiter adds into the bowl piping hot soup from a big pot before serving.  That simple.

The soup and the wanton were excellent; the hero however is the noodle.  Cantonese noodles were (obviously) originally from Canton and became popular in the 1920s.   Traditional noodles were made by hand using a long bamboo stick, producing some very smooth, springy noodles that yield a good bite.

Wong Chi Kei’s noodles deliver the same springy noodles as its founder started his business in Guangzhou and Dongguan before he moved his shop to Macau.  This noodle shop has made customers happy with its noodles since 1946 and the family had a satisfying lunch of noodles after a good work-out walking to and from the Ruins of St. Paul’s with a bit of window shopping on the side.

A simple noodle or congee dish was the best neutralizer to the scrumptious Macanese dinner we had the night before.

You are currently browsing the Noodles category at Storm In My Kitchen.