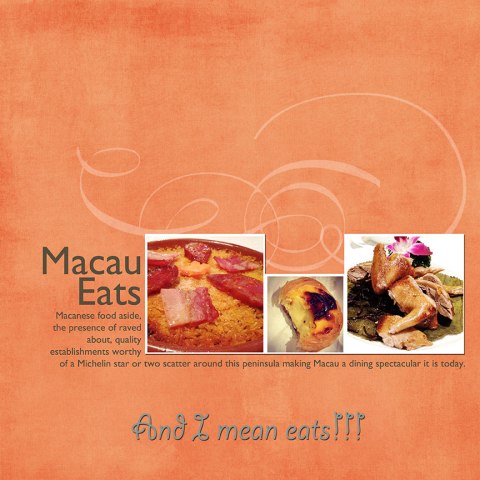 On board the TurboJet catamaran en route to Macau, I mentally planned our next few days in a city best known today as a high-rolling-casino-lover’s haven.  Not by any means my cup of tea, but there is more to this glitzy casino city than just the sin and the bling.  Although heavily dependent on gambling, Macau’s real attraction (in my opinion) has always been the food.  As an ex-Portuguese colony, Macau has married Asian and Mediterranean in its culture, architecture and even in its cuisine. 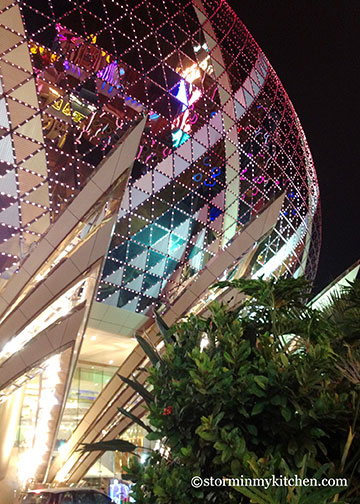 The flavors of Portugal intermingled with the Chinese and strongly influenced by the Southeast Asians, Africans, and South Americans has brought out a real fusion between East and West and has evolved to what is known today as Macanese cuisine.  The result is earthy and rich in texture, flavor, and aroma.

Macanese food aside, the presence of raved about, quality establishments worthy of a Michelin star or two scatter around this peninsula making Macau a dining spectacle it is today.

First off our agenda: Dim sum 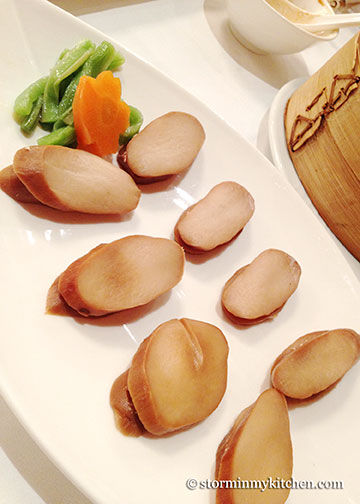 On the 2nd floor of the east wing of Hotel Lisboa is Portas do Sol.  Contrary to its name, it is a “typical” Chinese restaurant, well-lit with a lively atmosphere, serving dim sum dishes as well as Chinese haute cuisine with season specialties.  The extensive dim sum list reveals familiar and unfamiliar but exciting dishes.  Mostly from the Chef’s recommendation, the dishes we chose were as ambrosial as its presentation. 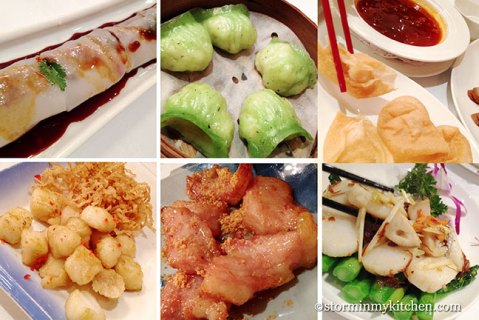 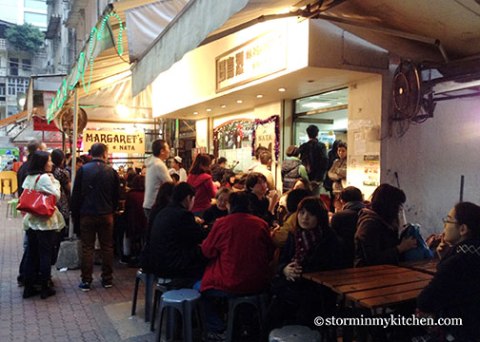 Then we walked down the street to a small alley.  Tucked away in that alley is a small café selling the much talked about egg tarts.  Creamy custard centers, slightly burnt caramel, buttery flaky crust – no wonder Margaret’s Cafe e Nata has queues any day of the week… well except Wednesdays, which was when we first found this hole-in-the-wall, darn!  I found myself walking the same route from Hotel Lisboa the next day.  I walked down Avenida Infante D. Henrique, passed the Grand Lisboa, crossed Avenida de Joao IV and veered right on that street until I saw a small (Margaret’s Café) sign pointing into an alley.  I followed that sign and joined the others in the queue and in less than 30 minutes, I was skipping my way back to the hotel with four pieces of exquisite Portuguese egg tarts to be devoured at the comfort of our room with some leftovers, which held up well for breakfast the next day. 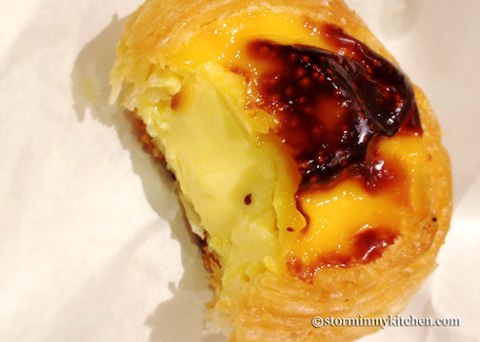 A Crossover from Hong Kong

This upscale restaurant has branches in Hong Kong, Macau and Shanghai. Chef and owner Tao Hwa Yan, once an apprentice to a legendary Cantonese Chef, Master Lee Choi, opened Tim’s Kitchen in a quiet street in Sheung Wan, Hong Kong in 2000.  Bringing with him the techniques he learned with the master, the restaurant started as an on-site private dining serving traditional Cantonese cuisine.  In 2007, Stanley Ho invited him to open a branch in Hotel Lisboa in Macau.  With both HK and Macau branches currently given a Michelin star, Tim’s is not cheap but worth a visit. 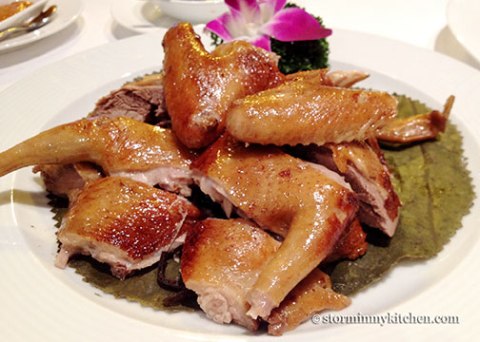 The waiters know their menu, and although we failed to order their (pre-ordered) signature dishes, the recommended succulent baked pigeon with preserved veggies wrapped in lotus leaves had us licking our fingers. 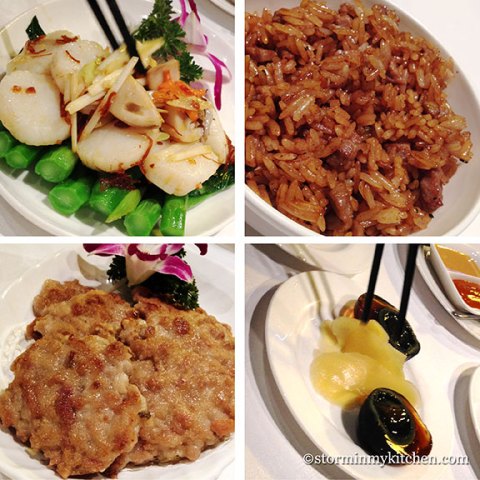 Other just as good dishes recommended to us were: Sautéed scallops with fungus and chives with XO sauce, Fried rice with minced beef, onions and shallots, and Pan fried pork pie with salted fish.

Trade in the gilded casino floor at the Venetian for a quaint cobblestone lane lined with Portuguese styled pastel townhouses in Old Taipa Village.  In one of these houses, at the corner of Rua dos Clerigos is Antonio. 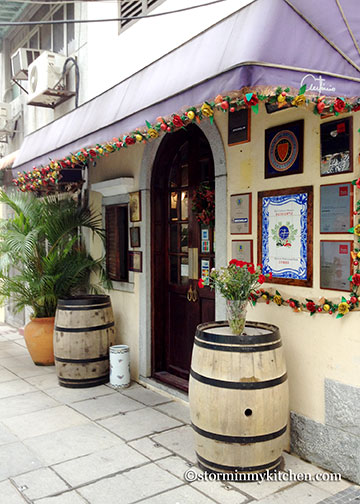 Not easy to find, we wandered around way before lunch hoping to get a table.  And in a small Alley, we chanced on some Filipino restaurant staff who happened to be taking their breaks from THE Antonio’s kitchen.  With their help, we managed to get ourselves a table.  Antonio Coelho has been preparing authentic Portuguese food in Macau since he relocated in 1997. 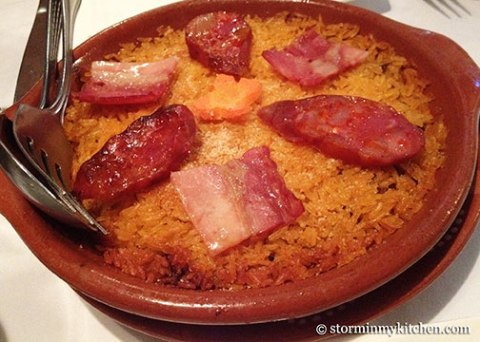 Arroz de Pato – shredded duck, rice, and preserved sausage baked into a flavorful, aromatic dish.  A signature dish not to be missed.

Following the hearty meal, we wandered around the old village. 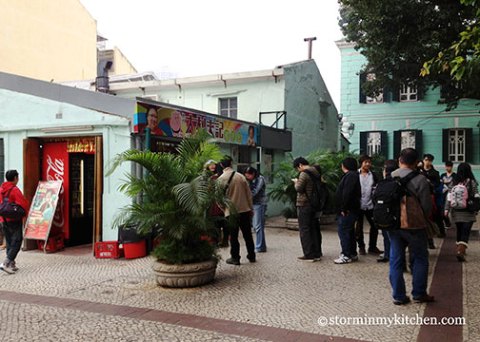 In a corner, near the Pak Tai Temple, we see a line forming but much as we would love to try Tai Lei Loi Kei’s famous Pork Chop bun, dessert appeals more than the bun.  This will have to wait.  So we walked back to Antonio to where he opened a café across. 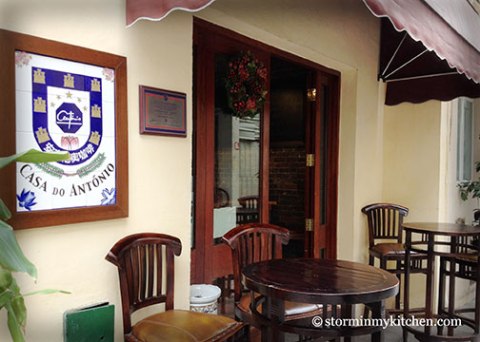 We found our corner and ordered 2 amazing desserts to die for. 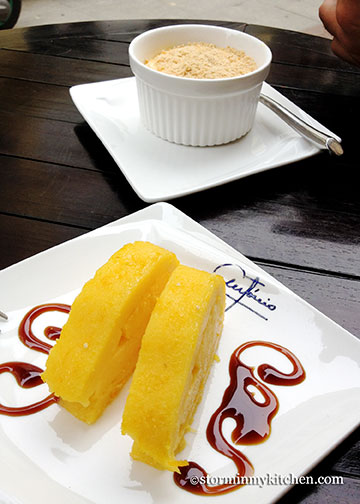 The Serradura is as velvety as this one and the orange roll is a perfect combination of moist cake, orange liqueur and caramel.  Did I say to die for?

You are currently browsing entries tagged with Dim Sum at Storm In My Kitchen.